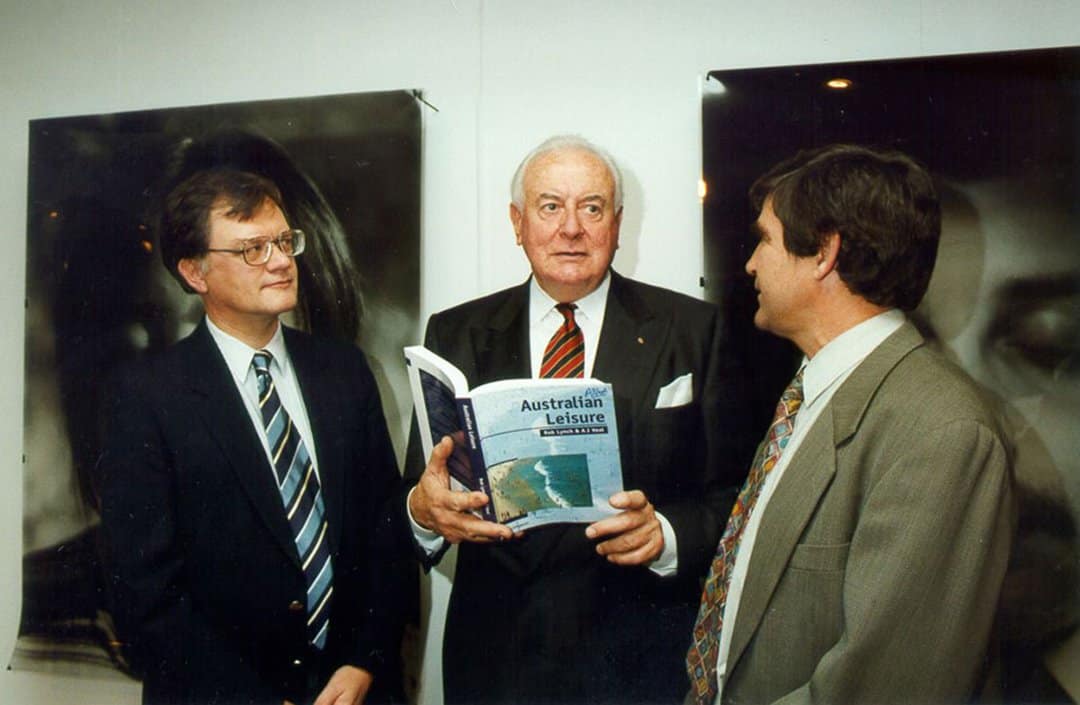 Gough Whitlam with authors Tony Veal and Rob Lynch at the launch of Australian Leisure, 1996

Given the number and scope of policy reforms by the 1972-75 Labor government led by Gough Whitlam, it is perhaps not surprising that, in the many tributes paid to Whitlam following his death on 21 October, 2014, little attention has been given to his contributions to the field of leisure. However, in the foreword to the first two editions (1996 and 2001) of the textbook Australian Leisure1, Whitlam himself provided a comprehensive account and appraisal. This is reproduced below and reminds us of the significance of the foundations laid for the leisure sector in Australia at that time.

Back in November 1972, prior to the closing days of twenty‑three years’ rule by the conservative parties in Australia, I delineated the Labor Party’s policy in a speech at Blacktown Civic Centre in the western suburbs of Sydney. The speech delivered on that occasion signalled a massive program of reform, one component of which was a series of initiatives related to the quality of life. This fuzzy ‘quality of life’ notion raised a few eyebrows across the nation at the time, but we were serious in our program of radical reform and committed to the view that government has a key role to play in improving the quality of life. Policy initiatives in support of this commitment involved provision of community amenities and leisure services, along with the promotion of sport, fitness, the arts, open space, and parks.

Part of the philosophy behind my Government’s program of reform is outlined in the following lines extracted from the 1972 speech:

There is no greater social problem facing Australia than the good use of leisure. It is the problem of all modern and wealthy communities. It is, above all, the problem of urban societies and thus, in Australia, the most urbanised nation on earth, a problem more pressing for us than for any other nation on earth2.

Some years have passed since these words were spoken, but what I proposed back in 1972 as the problem of the 1980s is also the problem of the 1990s and is destined to remain a problem for the foreseeable future. Leisure, like all things human, is constantly changing and each new generation enters into a leisure environment – in terms of non‑work hours, urban recreational space, the environment, technology, popular culture and the like – which is recognisably different from that which preceded it.

My government recognised the need for reform in this important and changing sphere of life and, for the historical record, some of our achievements are referred to below. Armstrong’s (1985)3 thesis is the basis for the précis of policy initiatives which follows.

In fulfilment of promises made in relation to the quality of life and urban policy, the first Federal Department of Tourism and Recreation was established on 19 December 1972, and Frank Stewart, a first grade player with Canterbury‑Bankstown Rugby League Club, was appointed the Minister. The Department was responsible for the initiation of policies and the implementation of Government decisions on the development of tourism and recreation in Australia. As Armstrong4 rightly asserts, ‘the Department proceeded not in isolation, but as part of a total package of reform policies. The underlying basis to these policies was the intention to improve the access of individuals to communal resources’. Through a process of community consultations, the Department uncovered an enormous range of need in the areas of community recreation, sports development, the environment and training. Issues related to each area were addressed for the first time between 1972 and 1975. The Department commissioned a series of reports, one of which led to the establishment of tertiary education courses for people working in sport and recreation. Other reports addressed issues related to women and leisure, the recreational priorities of youth and tourism development. The concept of leisure was promoted through seminars and publications. Community centres were created and policy initiatives were directed towards youth affairs. A research program was initiated in an attempt by the Department to gather intelligence about this hitherto neglected area.

In the case of sports development, the Department of Tourism and Recreation encouraged national sports associations to prepare plans for long-term projects and, later in the Government’s term, allocated grants to projects of a long-term nature only. Sport had not traditionally received assistance from the federal Government and so there was a conditioning process involved for organisations not used to preparing submissions and long-term plans. The Fraser Government abolished the Department on 22 December 1975 and in 1976 withdrew entirely from direct support of sports development, just before Australia’s undistinguished performance at the Montreal Olympics. This withdrawal signalled a reversal of policies of the previous three years.

In the area of the arts, I had the privilege as Prime Minister of laying the foundation stone for the National Gallery in 1973 and letting the contract to build it. Then, in 1975, I put through the National Gallery Act, the gallery finally being opened in October 1982. By the 1970s, nearly all state galleries, museums and libraries had been in decline for decades. The national initiatives spurred the State governments to improve the accommodation, services and standards in State collecting5. I later had the honour of chairing the Council of the Australian National Gallery for four years (1987‑1990). While collections and structures flourished in galleries, they did not flourish in museums. In April 1974, my Government appointed a committee chaired by Peter Pigott to report on museums and national collections. The report was tabled on 5 November 1975. The Museum of Australia Bill was introduced in April 1980 and received assent in October of the same year. As yet, however, the foundation stone has not been laid!6 In contrast to the rapid developments which occurred in the area of sport (e.g. development of the Australian Institute for Sport and the Sports Commission) under subsequent governments, I was moved in 1990 to say, ‘apparently the Prime Minister believes that there are more votes in sports than in arts’7.

Expenditure figures played a major role in measuring the effectiveness of Sport and Recreation policy during the course of my Government. For the Budget period 1975‑1976, the appropriation for the sport and recreation area alone was $12.2 million, a $4.1 million increase on the previous year. Of this,  $6.3 million was allocated to capital assistance for leisure facilities, community sporting and arts/cultural activities. A total of $3.4 million was allocated to youth, sport, national fitness and community recreation. The amount expended on capital assistance for leisure facilities represented the bulk of all outlays from the sport and recreation branch. The emphasis was therefore placed on servicing the community with facilities8.

In the case of the provision of such facilities, Armstrong9 builds a case in favour of technical efficiency. ‘The money expended brought immediate improvements to the provision of facilities through such projects as re‑surfacing playing fields, providing floodlighting, building indoor recreation complexes, providing multiple netball courts, upgrading pool equipment and building boat ramps and pontoons’. Such expenditure was in line with my Government’s commitment to improve community standards and the quality of life.

The Department of Tourism and Recreation was also active in its tourism development role and from the outset recognised that despite the emphasis given to overseas tourists, the Australian tourist industry is based and dependent largely on the movement of Australians at leisure in their own country. A research program was initiated to enable the Government to draw a profile of Australian tourism to guide it in its policy development. The first national Domestic Tourism Survey was administered in 1975 and now such surveys are a central part of the industry. The Department also became involved in tourist attraction development, accommodation assistance, training of tourism personnel and the licensing of travel agents10.

Because of the vast range of initiatives which the Department undertook, not all were successfully completed. For example, Frank Stewart asked Dr Allan Coles of the University of Queensland to lead a study group to examine the feasibility of a national sports institute. The study group’s report was published in November 1975. It was not, however, until September 1980 that the Fraser Government incorporated the Australian Institute of Sport as a public company. This it did by way of amends for its earlier withdrawal from support of sports development11. The Australian Institute of Sport Bill was introduced by John Brown [Labor Minister for Sport, Recreation and Tourism in the Hawke government] in April 1986 and received assent in October 1986. Now after two decades of intermittent attention by successive Governments, the importance of each area addressed by the first Department of Tourism and Recreation is more or less taken for granted.

When I was approached to write the foreword to this book I was pleased to see that many people across Australia had seized the opportunities made available to them in the course of my Government, as evidenced in the maturing field of leisure and recreation studies in Australian universities and colleges of technical and further education.

Leisure services provided by Federal, State and Local Governments, and in the voluntary and commercial sectors, have expanded enormously in the last twenty years and become increasingly professional. These services are vital for the quality of life of Australians and require sound professional training and education of the personnel involved. For this they need literature and other resources which reflect Australian conditions and address local problems at issue. This book by Rob Lynch and Tony Veal fulfils this role admirably. The book presents a comprehensive picture and analysis of leisure in Australia. It covers the history of leisure, play and culture in Australia including the 40 000 year history of Aboriginal culture and the continuing influence of indigenous culture on contemporary Australian life. The book inquires into many aspects of leisure including sport, outdoor recreation, the arts, entertainment, leisure in the home, and tourism. Politics and the role of government are examined as are voluntary organisations and private leisure enterprises. The authors have presented us with a view of leisure which illuminates both its political and historical importance in shaping aspects of contemporary Australian life and identities. The book also engages in areas of sensitive debate concerned with race, gender, age, and multiculturalism, situating leisure in the political context of each of these areas.

In my role as Australia’s Ambassador to UNESCO I was again alerted to the political power which can be exercised through sport and leisure, as the African nations had me chosen as the Chairman of the Second International Conference on the Sports Boycott against South Africa held in Paris in May 1985. Later, when touring Africa with my wife Margaret in 1993 in support of Sydney’s bid to host the 2000 Olympic Games, I found that Australia and its sport and leisure traditions are held in high regard throughout the world. In Africa, those whom I encountered were very impressed that we had encouraged and provided for our people to develop their potential in our own, non‑prescriptive way. Freedom of choice has been preserved in the leisure and sporting policies of the past few decades.

I trust that the accomplishments of the Labor Government of 1972‑75 have laid some foundations for future generations, as I remain committed to the enhancement of the quality of life of all peoples. As Australia moves into a new century, it will face both fresh and familiar challenges in relation to the environment, technology, multi‑culturalism and the quality of life. The relatively free realm of leisure and the contribution which this area of activity makes to the quality of life will, I believe, continue to be central to many of these concerns.